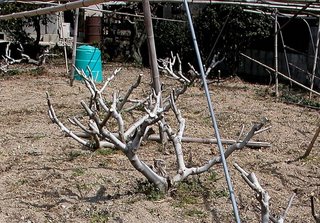 These photos of pruned, dormant figs are from a web site by Ken Love in 2004. It basically looks like a modified espalier style of pruning the fig trees. He describes the Japanese method as (paraphrased from the linked site):

Young trees are grown to about 2 meters tall. They are then gradually lowered to a horizontal position, over a period of about 10 days. These cordons are then tied to horizontal supports, about 40 cm above the ground. 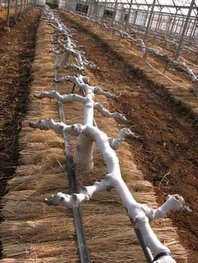 A pair of verticals can be tied in opposite directions; or 4 in an X pattern. The lateral's tips are pruned at a length of 2.5 to 5 meters.

During the dormant season, the vertical branches are pruned to 2 to 3 nodes each. When shoots appear, only the outermost shoot is kept. During Spring, shoots for fig production sprout from the horizonal limbs. These are pruned such that new upright cordons are 30cm to 50 cm apart, with 50 being considered optimal for production. The vertical shoots are tied to supports. Each vertical produces 18 to 20 fruit per season.

There are many more photos on the site; I could not find clear photos of figs in production stage. This looks like a nice method for back-yard production of figs, since it could be applied to a limited space.

Posted by Daniel Wachenheim at 7:24 PM

Daniel Wachenheim
This blog is a garden diary combined with home research journal combined with notes for future years. Also, a few things here and there about other projects. I hope the information posted here is helpful. I don't have promotional links. I don't advertise companies or products. My philosophy is do-it-yourself, reduce, reuse, repurpose, create, learn, share,, and enjoy the process. I enjoy propagating my own plants and trees, grafting, saving seeds, and passing on to another generation. Accessible gardening is a growing interest. That's all I can think of at the moment. I hope you enjoy and learn some useful or interesting things from my little blog.