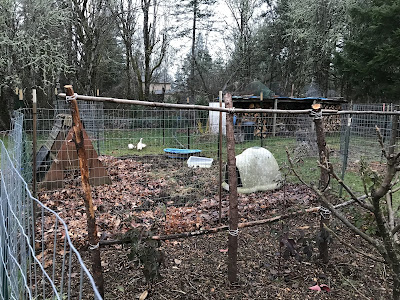 We've had some problems with the chickens and ducks together, although I don't know if it's the birds or local predators.  The duck eggs have had holes punched in them, with some contents removed and the rest left to spoil.  Chicken beaks poking the holes?  Rodents?  Meanwhile, two hens were murdered, leaving their corpses mutilated and missing parts.  We did see then ducks eating at the hen remains.  Did the ducks do it, or racoons, or other predators?

So, I built a new duck enclosure. 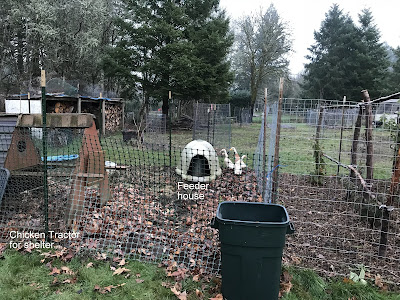 This is completely separate from the chicken yard.  The area will become a warm-season kitchen garden bed in May or June, for tomatoes and beans.  I wanted fencing against deer, but for now it's fencing to keep the ducks in and, hopefully,  potential predators out.  They have a grassy area, and areas that I already turned over, and lots of tree leaves for rooting around in, and dry tree leaves for bedding.

They already started rooting around in the grass.  As they eat the bugs, slugs, maggots and worms, I hope this will feed the ducks and make the garden bed more hospitable for future gardening.  Of course, the ducks also fertilize it.

In May, I have two potential new areas for ducks and/or chickens to work.  The first is orchard, and the second is around the raised beds, which will be separated by an expanse of grass.  Meanwhile, we'll see if the egg damage and hen murders come to an end.
Posted by Daniel Wachenheim at 8:54 AM 2 comments:

I decided to move a fig tree, that I originally planted in 2001.  It was at my old house in town, which I have been gradually converting the yard into a more conventional lawn and specimen planting lawn, for eventual sale.  That process is almost complete, but I didn't want to lose this good fig variety.

This tree was bought via mail order from Wayside Nursery on the East Coast in 2001.  It was sold as Petite Negri.  They sell fig trees using the same photo, but different name, currently.  On the defunct figs4fun website, it was identified as Aubique Petite.

Whatever the true name, this tree does not grow as fast or large as many other varieties.  I 16 years, it's grown to about 8 feet tall, and similar spread, and bushy.  I had it pruned to a single trunk, but let some suckers grow in case the main tree does not survive the move.

This is probably my favorite fig by flavor, richly flavored figs, black skin and dark red flesh.  On the down side, it has almost no breba crop, and the main crop usually ripens when the rains come, so most are lost to mold.  The tree  grows slowly, and cuttings take a few years to start producing, so I wanted to preserve the tree rather than just taking cuttings.

The old location was near the base of a slope, shaded on its South and Western sides and a little Eastern shade as well.  Maybe it will produce earlier and better in a sunny spot.  The new location has full sun on South and West, and almost full sun on East.  It is near the top of a slope.  North of the location is the light yellow painted house.  This change of location might have the intended effect of earlier figs, although Battleground is a higher elevation and a little colder during winter, than the old Vancouver location.  The soil in the new location is also softer and more fertile.

I'm not getting younger.  It took 2 days to dig.  I had to remove some lower branches and suckers, to dig a trench, then dig under the tree.  I got all of the root ball that I could handle.  Obviously, a lot of root mass was lost, probably 75% of it,  a couple of roots as big as 3 inches diameter.  Leaves were already starting to yellow and fall before the move, and many fell completely, within a week after the move.  It's a drastic trauma to the tree, but fig trees are tough and resilient.  The stems continue to look healthy, with healthy looking buds.  I think it will adjust it's top growth next Spring, with slower growth, while the roots branch out and re-establish during Winter and Spring, in the new soil.  I will have a nice mulch, and water weekly.

As a backup, one of the suckers already had roots, so I had already severed that from the parent tree, and planted into a container.
Posted by Daniel Wachenheim at 9:31 AM No comments:

This is chestnut Precose Migoule, a French hybrid between European and Japanese species.  I chose it because some reports have it bearing at 2-3 years after planting, although others state 3-5 years.  It is described as a good pollinator for others, and with good nuts.  Also disease resistant.

This replaces the Marigoule chestnut that barely grew in 2017, and wasn't much to start out with.

Burnt Ridge did a great job with packing.  I asked for the tallest tree possible.  They bent the top foot over in a wide loop, to fit into the box.  Other trees have been topped instead.  I provided a brace to straighten it.  That may be removed by Spring.

I gave it the usual protection, 1/2" hardware cloth sleeve to discourage voles, and a 5 foot tall circle of wire fencing.  Later, I can add 1 inch mesh plastic fencing to reduce deer problems with pulling on leaves that stick through.

No mulch, yet.  I don't want to provide vole habitat.

Fall planting usually works well for me.  This is a little late but I think OK.   It won't grow or heal immediately, but I think that's OK too.

Now comes the wait for Spring!
Posted by Daniel Wachenheim at 9:07 AM No comments: