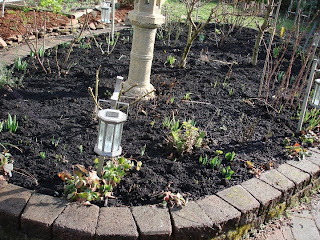 Here is the rose and fruit raised bed after adding a layer of yard waste compost. this is about 1/2 of a truck load, but since it's heavy, there is less than a truck load of bark mulch. Cost about $5.oo for what is in this bed. Since it's black, it should help the garden bed warm up.

I've also sprayed twice with a double strength neem spray. The reasoning is that since I missed covering the peaches this winter, I'm hoping for some benefit from neem in controlling leaf curl. The peach buds are starting to swell, so it seems like now is the time. I have not seen that this will work, but I already sprayed once with copper spray, and after reading that copper can build up in the soil, I dont want to over do it.

This garden bed started out with just roses, but now it also has 2 miniature peaches, 1 cordon apple (North Pole), a strawberry border, Fallgold raspberry, a currant, and various Spring bulbs. With all of the food plants present, non-organic is not the way that i want to go.

Posted by Daniel Wachenheim at 4:00 PM No comments: Links to this post 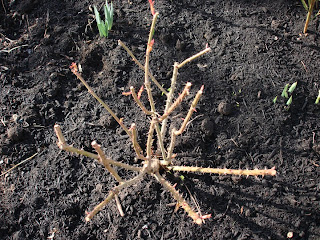 Tranquility Rose. All of the roses are at a simlar stage, buds about 1 inch on most stems. 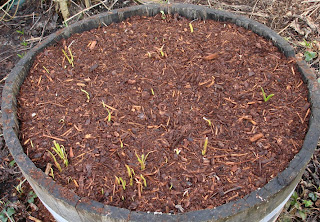 Chinese Chives. This 1/2 barrel received a layer of chicken house compost, then a layer of bark mulch to prevent weed growth, 2 weeks ago. 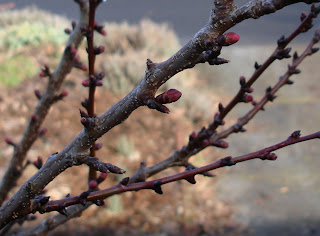 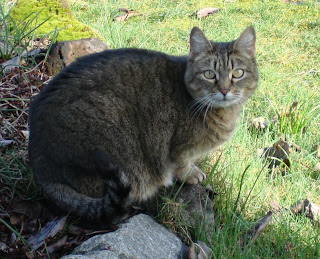 Posted by Daniel Wachenheim at 3:26 PM No comments: Links to this post

THe fig trees have no visible bud swelling yet. The embryonic brebas are probably no larger than in the fall. I keep looking at the Lattarula / White Marseilles / Lemon Fig and thinking it is dead. It is supposed to do well here. It is on the South side of the house, so hsould be early. 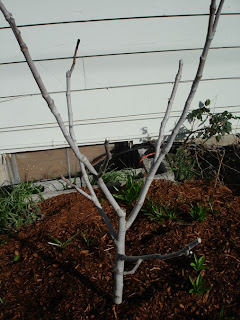 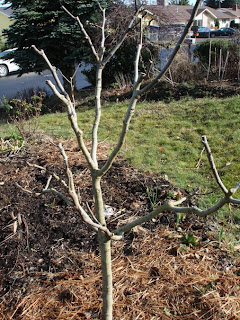 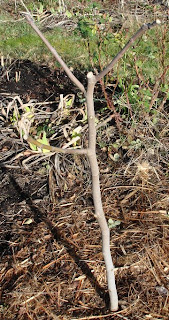 Posted by Daniel Wachenheim at 3:25 PM No comments: Links to this post 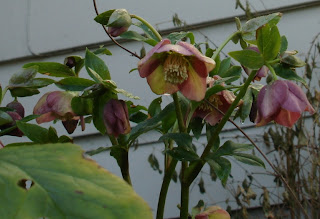 Helleborus, unknown variety. It's been growing in this dry, eastern exposure spot since we bought the house, so at least 7 years old. It was large then so probably much older. 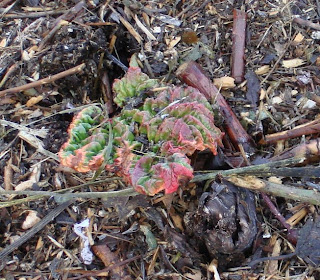 Victoria rhubarb. This received a layer of chicken house compost, then some coffee grounds, then a layer of yard choppings as mulch. That was done over the past several weeks.

Salix chaenomeloides, Japanese pussy willow. OK, I cheated. This was planted 2 weeks ago, a bare root from Fred Meyer, already in bloom. 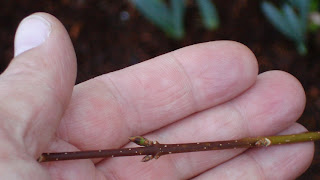 Forsythia, unknown variety. This was grown from a stick that I picked up on the street while walking the dogs, about 2 years ago. The shrub is 6 feet tall, but only a few stems. Not ready to bloom yet.

Posted by Daniel Wachenheim at 3:24 PM No comments: Links to this post

Will I or wont I? one question is whether this will go up the hill on Mill Plain on my way to work... especially with a big boy like me in it. Hmmmmm. 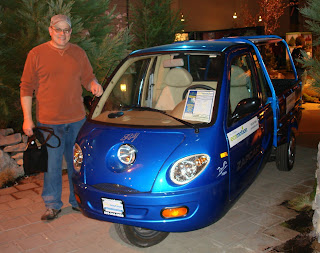 I would love to bike to work, but I can't do that AND work 14 hour days. I wish that I could figure out a better way. The hours are killing me. But so far, I havent found an answer. Anyway, at least if I drive a little solar cart to work I can feel more 'green'. Assuming, as noted above, that it will actualyl take me there. The truck gets 40 miles to the charge, and goes 40 miles per hour. Both are good enough for my in-town only, 10 mi each way, commute. 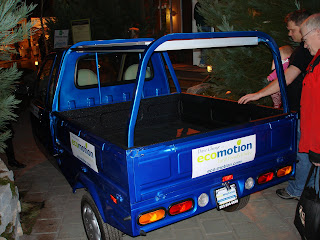 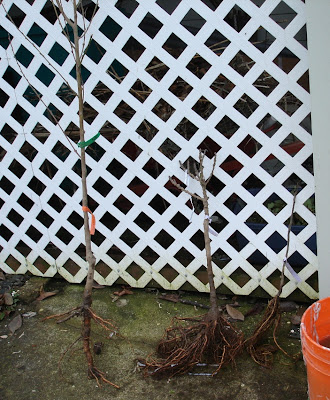 These came on the 14th, planted on the 15th. They were bought via maile order from RaintreeNursery.com. Impressive bare root trees, strong roots, sturdy stems, well packaged. I'm very pleased. The tallest tree is a tri-lite peachplum, a hybrid between a peach and a plum. Next is an El Dorado miniature peach. Finally, the smallest is Desert King Fig.

They were soaked in water for several hours before planting, while I went to the optometrist for a general exam (no significant changes).

A few broken roots were trimmed, otherwise no pruning was done. 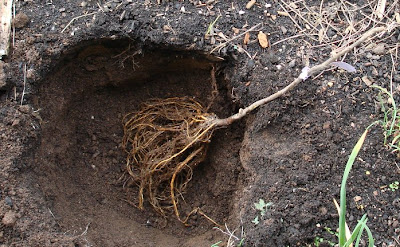 Here is Desert King in its planting hole. The roots were so plentiful and long, the hole was bigger that the tree was tall. This is planted on the south side of the house, in a garden bed that has been worked with compost for 5 years. The only soil additive is a handful of crushed eggshells for calcium. 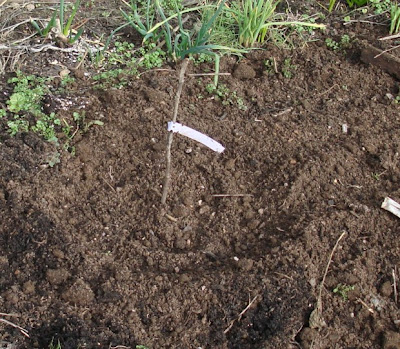 This is the smallest tree of the bunch, but figs are fast growers. 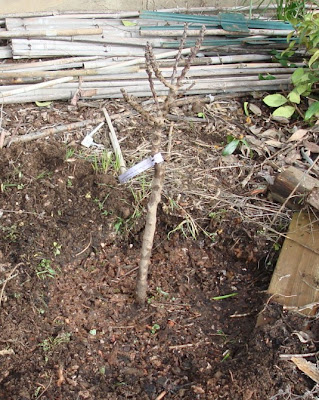 El Dorado miniature peach. This is also on the south side of the house. These grow very slowly, and mature size is small (about 6 feet), so it was planted under a window. 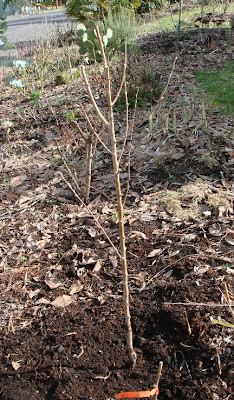 Here is the ri-lite peach-plum as well. It is in the front yard.
Posted by Daniel Wachenheim at 8:10 PM No comments: Links to this post 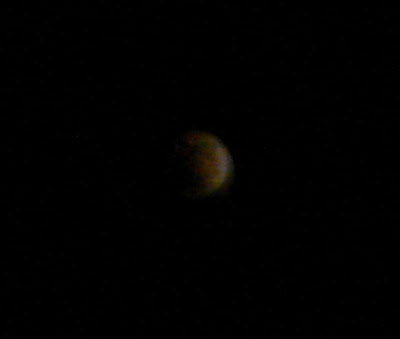 This must be a good time to do SOME gardening task. Photo is with Sony Cybershot, not a telescope (obviously)
Posted by Daniel Wachenheim at 8:07 PM No comments: Links to this post 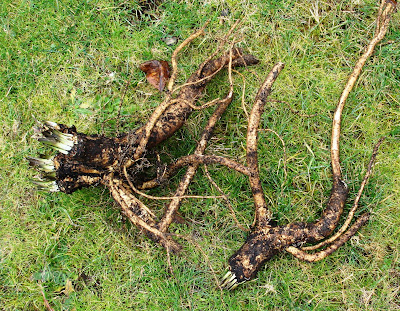 This plant has been growing for 2 years. I dug up the root today. Made some sauce - it was actually fairly mild for horse radish. I used about equal parts payonaisse and grated horseradish. Replanted a root for next year.
Posted by Daniel Wachenheim at 11:30 AM No comments: Links to this post

This was an interesting exercise. People really did sit around and talk about the pros and cons of the various candidates, got the opportunity to express their opinions going in, change their minds, and a decision was made for each precinct. For our precinct, about 40 people went for Obama, about 15 went for Clinton, a few remained undecided. Several who started out undecided went for Clinton. This is out of a precinct that has HUNDREDS of people. Interesting.

Ning will be an alternate delegate for Clinton. I went in + pro Obama, left lukewarm for Obama.

Concerns:
I cant decide on the pros and cons of each on health care plans.

I still haven't forgiven Clinton for her pro-war vote. I think she's brilliant, and the only reason that I can think of for her voting to support the war was political. The war has killed thousands of young Americans, and hundreds of thousands of Iraqis, destabilized the region, and had no benefit yet either in or out of Iraq, except for giving voice and power to religious militants. Obama was openly against the war from the beginning, and seems to have more integrity on that issue.

Obama seems like he needs to hold his nose when talking about gay issues. Actually, both he and Clinton are about the same as far as Human Rights Campaign Fund is concerned, but I've watched the videos, and except for stating that "marriage is between a man and a woman", he stumbles over words and pauses throughout the discussions. He also reached out to a known homophobe in his South Carolina campaign. On the other hand, he did speak out against homophobia in African American Churches and even in the Illinois senatorial debate, as well. In his Youtube debate, as well as other forums, he states that as a white woman and a black man, his parents would not have been allowed to be married in several states, until the mid 60s; he expresses that this gives him some credibility on that issue. However, he then goes on to say that civil unions are OK, but not marriage, for same sex couples. Would that have been OK for his parents, too? Since his major push is to bring all of us together, the (perhaps unfair?) feeling that he does not embrace a major segment of the population, is suspect.

Actually, environment didnt come up at all (which is a big focus of my blog, anyway). I know that they have campaign statements. What I dont see is something to distinguish them from each other.
So far, I would take either over what the other side is going to offer, and do so wholeheartedly.
Posted by Daniel Wachenheim at 10:37 AM No comments: Links to this post