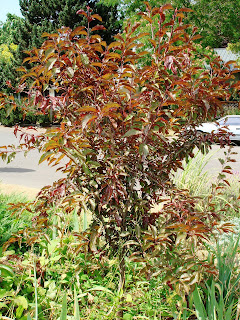 The Hollywood plum tree is branching nicely. I pruned it back a couple of weeks ago to maintain shape and compact "backyard orchard" size. 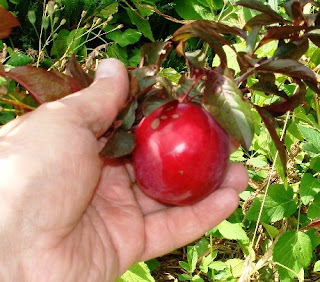 The ONLY fruit on the Hollywood plum tree. That's OK - this is just the 2nd season. Given favorable weather, this and the Shiro could potentially give more next year. That's a big if. Still, a taste in the 2nd season - great! It's still hard as a rock, but should ripen in August. 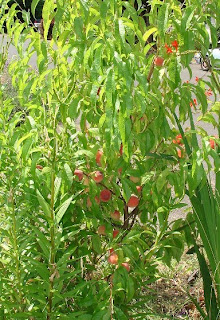 Trilite peach-plum. Lots of red fruits. All are small and hard, but I expect them to ripen in a few weeks. This is great! I thought I couldn't grow peaches here due to leaf-curl. 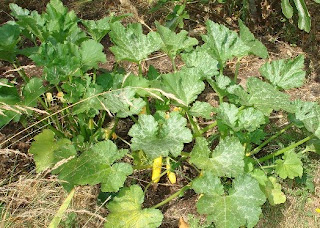 Now to the annuals. The zucchini and yellow summer squash are catching up. Again, in one or two weeks, we should be getting some great meals from these plants. 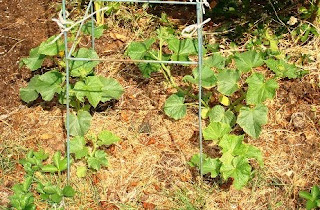 I made the first ties of the cucumbers to their trellis today. They are blooming as well.

Tomatoes, none ripe yet. I tied more to their posts today.

Onions -
Egyptian Walking onions are ripening the top sets. They will be ready to plant in September. I have plenty - was concerned, thought I overharvested this year.
White bunching onion (potato onion) - The tops were thoroughly dried off. I was worried that these were fully lost, due to late planting (spring instead of fall), then they were lost in the weeds. Not enough to eat many, but at least I saved them for next year.

I may create a raised bed or large container system for the onions this fall - seems to work quite a bit better, and will be easier to maintain. Just requires some ambition.

Garlic - similar, dug up some, but most is lost. Just didn't have time to take care of them.

Beans - no idea if they will produce this way, but I cleared out some weeds in front yard vegetable bed (last year's tomato bed), which was out of control. Then planted Roma II bush beans and Yellow french bush beans. I think we SHOULD get some beans from these in Sept, but it's a maybe/maybe not situation.
Posted by Daniel Wachenheim at 5:01 PM 2 comments: 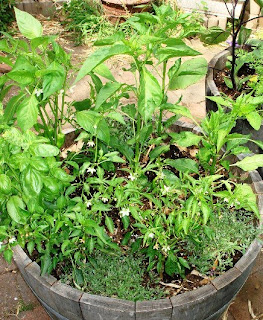 The peppers sat and sulked for a couple of months. So did the eggplants. Then suddenly... They shot up and grew like crazy. Now blooming, and some small fruits already developing on the pepper plants.

The fastest growing are the Banana peppers and Bell peppers.

I like having basil in the container. When I'm inspecting the peppers, I brush against the basil, and the frangrance is intoxicating. I ate some today on a sliced tomato. Yum. 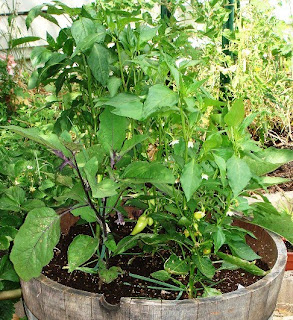 Both eggplants and peppers in this container.
The banana peppers are growing day by day.

I admit, I gave them a boost of miracle-gro tomato food. So now they no longer count as organic. My rationale is that they did not seem to be growing, and I wanted to give them a boost. Since they are in containers, their situation is already more artificial than the plants in the ground. 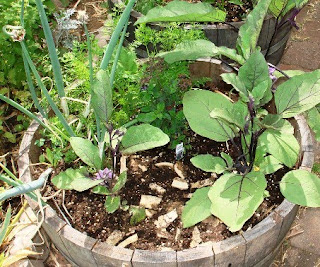 This container also contains some eggplants. I bought a couple of Japanese eggplants at Fred Meyer, because my own starts were so slow. My start is also taking off, but way behind the purchased ones. The onions in the background are Egyptian Walking Onions. I want the tops to dry off, then will plant them in september.

The potatoes are all harvested. I have some in a windowill to chit (sprout). They are taking their sweet time. Maybe I'll also plant a few in their barrels, see if they grow faster that way. The potato barrel method worked GREAT! Lots from both the fingerlings, and the gourmet white.
Posted by Daniel Wachenheim at 4:45 PM No comments: 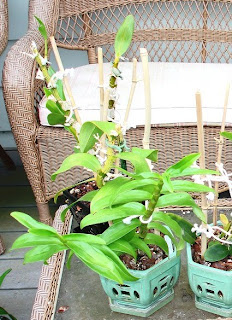 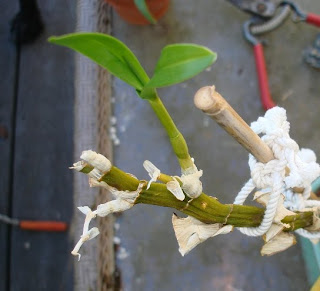 A close-up on the plant. This is a purple-flowered Yamamoto-type Dendrobium. 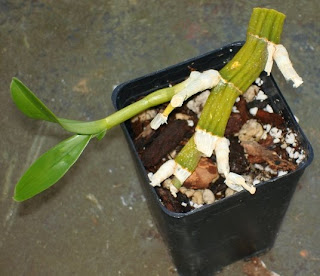 Most references say to twist or pull to remove the keiki. However, some state that whole pieces of stem can be sectioned, laid on beds of sphagnum, and used to start new plants. I decided to remove some stem along with the keiki, to give it a little nutrition and avoid damage to the baby plant. 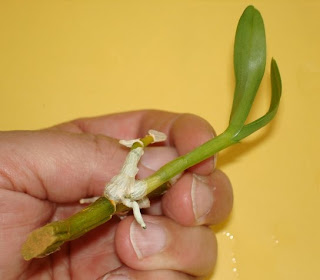 There is always concern about mold. Mold and fungus hasn't been much of a problem for me so far. Never having tried cinnamon, I decided to dist the cut end with cinnamon. I'll leave it overnight to dry, then plant in the shown container. If I think of it, I'll add a photo of the started plant to this entry.
Posted by Daniel Wachenheim at 8:19 PM 2 comments: 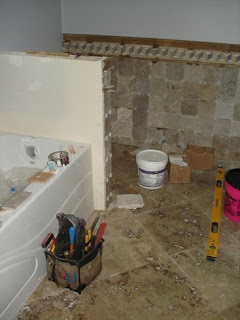 It's no longer a do-it-yourself project. I hired a contractor. After 2 1/2 years, it now has plumbing rough in, electrical rough in, drywall (paperless to reduce mold), it's painted, and some tile is in place. 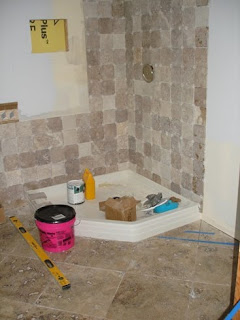 I suspect there will be some plants in the window and/or on the pony wall. Maybe a phaelenopsis?

The main thing now is the light at the end of the tunnel, and stop living in a construction zone after more than 2 years. It's time.
Posted by Daniel Wachenheim at 6:11 PM No comments: 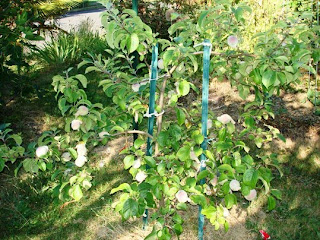 Here's Liberty apple. Doesn't require much by way of pruning - the apples keep the growth to a minimum. Unclear if the 'socks' made a difference, we'll see when they ripen. 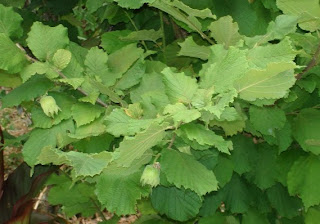 I was surprised to see that some hazelnuts did set. I thought they passed that stage with no nuts forming. We'll get a few. I pruned the branches back a little to encourage branching at small size. 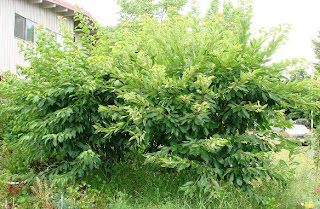 The sweet cherries were growing out of control! They had 2 to 3 feet of lush growth. I don't fertilize them at all, but they must like the clay soil. Plus, last year I mulched with compost, which is as good as fertilizing. I'll avoid using so much compost in the future. 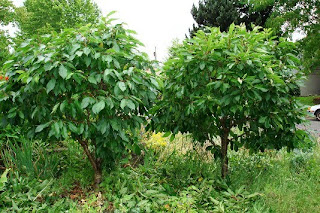 The same cherries, after pruning. I cut all of the new branches back, to 4 to 6 nodes, which is about 4 to 6 inches. I chopped the pieces and threw them under the trees for mulch, but the area was so weedy, I mowed with the lawnmower. Now the choppings are mulch for the cucumbers. I think I'll plant grass seed this fall. Then I can just mow, and don't need to worry about weeding.

Posted by Daniel Wachenheim at 6:10 PM No comments:

What's up in the barrel gardens?

Here's what happened with the potatoes. They grew lush and green, then the weather warmed up. 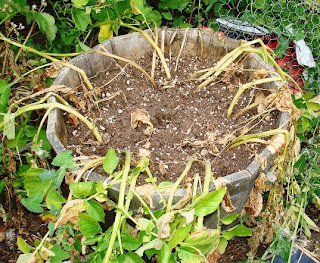 I thought I should keep them going a little longer, but they wilted quickly. So I dug out the fingerling potatoes, which wilted the worse - although the white gourmet aren't far behind, as shown here. 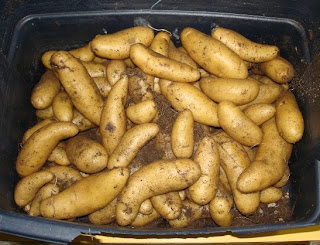 These were excellent! Still a couple of pounds left. Just boil about 15 minutes, then a little salt, some butter, and chop some scallions from another barrel garden. Terrific! I like this potato barrel idea.

I've left some out to sprout, maybe we can get in a second batch before winter.

Technically not a barrel, but these container peppers are feeling the summer and have finally started to grow. 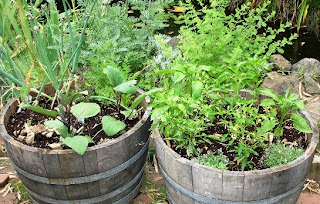 These barrels are mainly peppers and eggplants. Some of the eggplants are purchases. I know that's cheating, but my own are lagging so much. Next year, maybe start earlier, or keep them in a green-house arrangement. 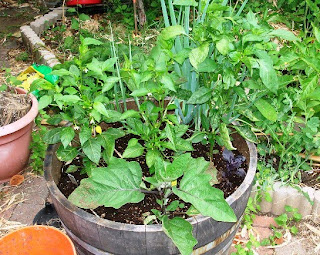 More peppers, mostly, and eggplants that I did grow to size. Not too bad, they are blooming now and peppers are starting to form.


Posted by Daniel Wachenheim at 6:09 PM No comments: 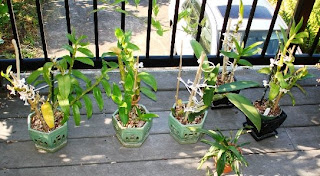 This spot is full sun for most of the day, except late afternoon. I had gradually adapted these orchids to full sun, but taking them out for a few hours at a time, especially on cloudy days. The I placed them on the North side of the house, where they get full sun except at the brightest time. Now they get full sun all day. These plants, Dendrobium nobile hybrids, Vaughnera, and a hybrid Cattleya, can take the full sun with no burning. In addition, Cattleya walkeriana seems to to fine in full sun. 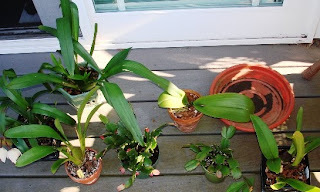 This location is against the north side of the house. It gets morning and late afternoon sun only. I discovered that Oncidium hybrids sunburn with less than an hour of full sun. Most I returned into the house again. My South window is shaded when the sun is high in the sky, by the roof overhang, so they don't get as much sun even though this is a south window. All oncidium alliance orchids are kept mainly in that spot, although there is one in this group that is doing OK. 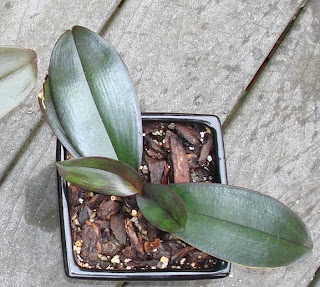 The Phalaenopsis are in the north window, indoors. They are doing well, growing healthy-looking new leaves. The leaves may be getting too much light, based on the maroon coloration, but they may just be a maroon-ish type leaf. 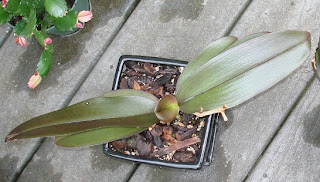 I do feel like I'm doing something right. Not only are they not dead, they are growing. Slowly, but I think that's par for the course with orchids.

I may cut a keiki off from a Dendrobium nobile and plant it. The original cane looks quite wrinkled and dried out, so maybe it's time. I think I'll do that now.
Posted by Daniel Wachenheim at 6:07 PM No comments: