I have the chestnut trees tucked in for the fall/winter, with an arborist chip mulch and good fencing.  The fencing is a double layer, 5 feet tall, welded steel 4 inch by 2 inch mesh, with fine pastic net 1 inch by 1 inch mesh so the deer can't pull the leaves and branches through the stronger but larger mesh.  If they grow as well next year, as they did this year, they should only need the fence for another year, maybe two.

I'm being extra diligent because deer are becoming a bigger problem - increased population, fewer food sources, no predators, no hunting in my area.

There was a big difference in vigor and establishment.  Two grew about 3 or 3 1/2 feet, one grew a few inches.  That was Marigoule.  I moved it to a different spot, where it doesn't matter as much if it flourishes.  I have an order in for a replacement in the spot where it was.  That is already set up with fencing as well.

Posted by Daniel Wachenheim at 9:36 AM No comments: Links to this post 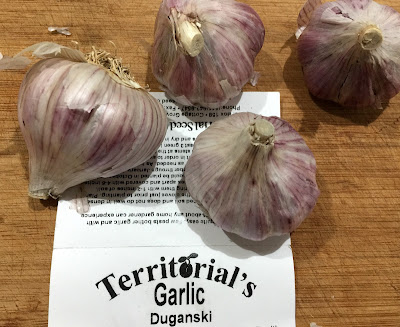 Today I planted garlic.  Three rows from my own harvested garlic, I think German Red.  Four rows of this Duganski from Territorial.  I also bought another type from Territorial, but the cloves were soft and shriveled.  I don't know if they are worth planting, or could have a disease.  I may try those in an unused raised bed, not anticipating planting onion family in that bed so maybe it would be worth a try.
Posted by Daniel Wachenheim at 8:18 PM No comments: Links to this post 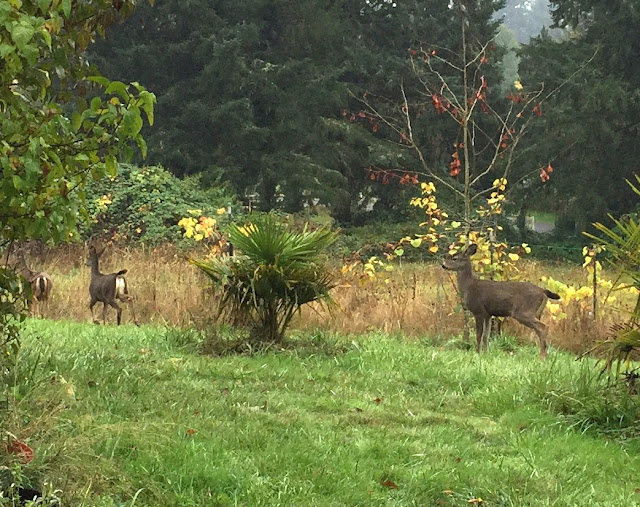 Posted by Daniel Wachenheim at 8:16 PM 2 comments: Links to this post

First turnip from the ones I planted this summer in July in a raised bed.  Looking good.  Nice flavor, crisp, not at all woody.
Posted by Daniel Wachenheim at 8:44 PM 3 comments: Links to this post 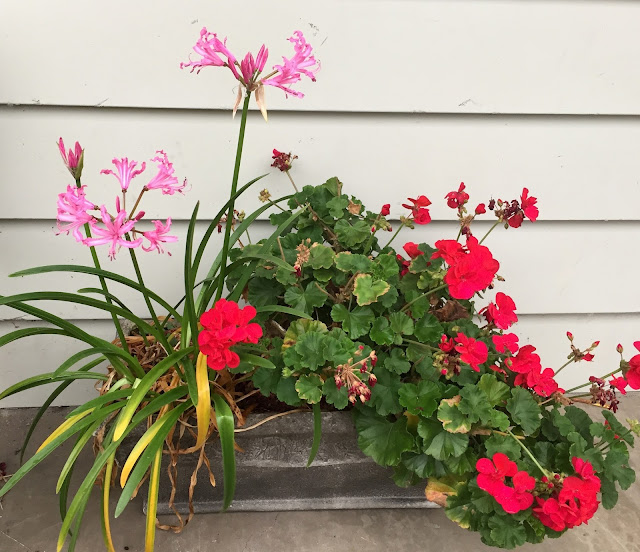 I moved these out of the rain, and will let them dry out as much as possible before moving them to the garage for the winter.  This planting is about 3 or 4 years old now.  The nerine is a nice surprise.  I thought they had died out.
Posted by Daniel Wachenheim at 8:43 PM No comments: Links to this post

New Load of Arborist Chips. Mulching Young Trees and Borders for Next Year. 10.14.17 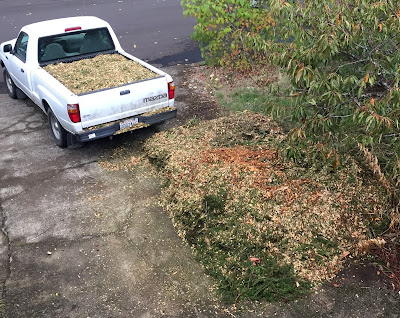 We had a large, old, dead tree cut down.  The arborist had a truck load of chipped tree branches, including those from our tree, so I asked for them to use as mulch.

It will take several truck loads to haul all of them.  So far, I've mulched a major section of the woods edge border, which I spent the last 18 months cleaning up and planting with trees, shrubs, and perennials.  It was fairly clean already, but with about 4 inch thickness of arborist chips, should not need any significant maintenance for most of 2018.

That's a major step in reducing my workload next year.  Many of the things that I planted there, were unwanted plants and shrubs that needed a new home.  Some were sizeable.  I didn't want to buy things that might not do well, or more likely, be eaten by deer.  Deer are the major limitation to what I can grow.  At this point, I just want to get trees growing above deer browsing height, and stick to the ornamentals that they don't like to eat. I know they won't eat the dwarf mugo pines, crocosmia, gladiolas, ferns, Helleborus, daffodils, or hyacinthoides.  Not sure about the Rhododendrons.  I'm watching for deer damage to the Dawn Redwood, but so far they have not taken a liking to it.

I also mulched the year old Chestnut trees.  They still need some hardware cloth to protect from rodents, then they too are set for the winter and for 2018 as well. 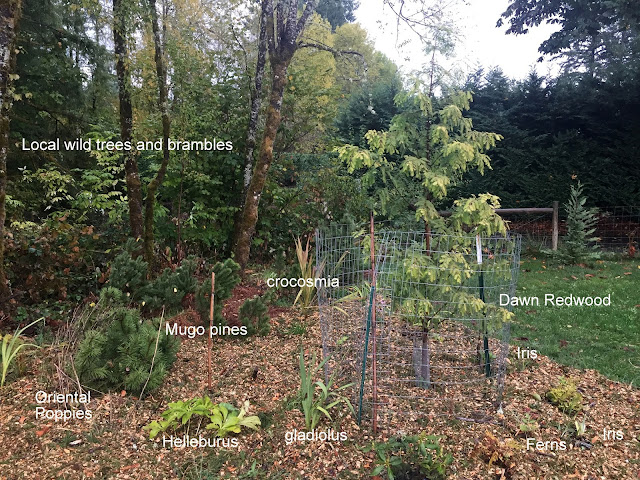 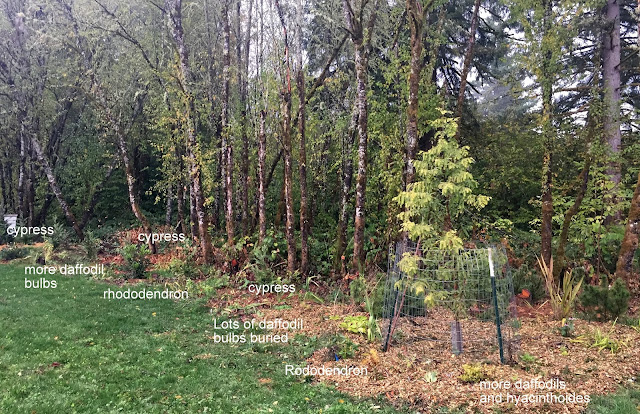 Posted by Daniel Wachenheim at 8:34 PM No comments: Links to this post

These are dwarfs, on M27 rootstock.   I transplanted them last winter.  I think they are around 16 years old.  They did fine.  The Liberty had about 20 apples, maybe as much as it can handle anyway.   Then Jonagold only had 3, and of those only one looks edible.  That one is alternate year bearing anyway, and this was to be the off year.

I'm happy with how they responded to transplanting and care.

Posted by Daniel Wachenheim at 7:09 PM No comments: Links to this post 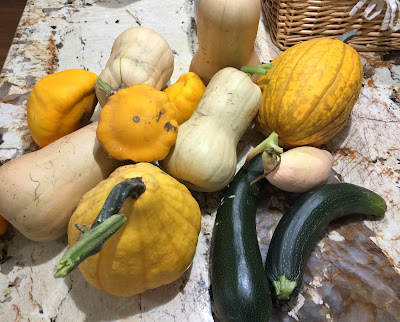 The turnips were planted in a raised bed in July.  This is a massive turnip now.

The squashes are butternuts, scallops, and some compost volunteers.  Those may be natural hybrids of different types that I grew last year. 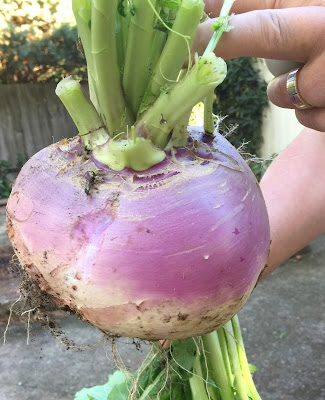 Posted by Daniel Wachenheim at 7:02 PM No comments: Links to this post

Things are winding down for the gardening season.  I am starting some maintenance and improvement projects to help next year go better.

The make-shift deer cages mostly worked for the young chestnut trees.  Minimal damage.  However, I wanted room to grow for next year, potentially the last year or next-to-last year they will need deer cages.

This year, some parts of my orchard had major, disappointing, set-backs due to failed deer cages and more aggressive browsing.  I think there are more deer this year, and saw a group of five in a neighbor's yard this week.  There are no deer predators now, and hunting is not  allowed.  I don't know what will happen as the population increases above what the ecosystem can handle.  Meanwhile, with a hot dry summer, and probably more hunger and thirst, they ventured into tree and plant varieties that they would normally not eat, and they were more aggressive about getting into barriers that they would normally not bother with.

I usually use standard welded wire fencing, holes are 2 inches by 4 inches, and height 4 feet.  That was usually fairly secure, but then deer learned to grasp leaves that stuck out through the fencing, pulling to rip off branches much further in the cage.  In some cases, branches were pulled off the trees, leaving big wounds.  One tree was completely destroyed.  Deer also reached over some of the fences to chomp down branches that emerged above the cages.  So, I changed some of the fences to plastic fencing with 1 inch gaps.  That prevented leaves from sticking out through the gaps, but the material was too flexible, and in some cases the deer pushed the fencing down, giving access to entire trees to eat the tree.  I want to be more prepared for next year, and avoid more disappointing damage if possible.

Two of the new chestnut trees put on roughly 4 feet of growth this year, growing from about 2 feet tall to a little more than 6 feet tall.  I cobbled together protective fencing as they grew, which mostly worked but didn't feel stable.  I used the heavier metal fencing, and added either chicken-wire fencing, or plastic 1-inch mesh fencing, as a second layer of protection.  Anticipating next year's growth, I wanted wider, taller fences, so built a new one yesterday for one of the trees.

Now it has stronger fence posts to prevent knocking the fencing over.  The fencing is 6 feet tall, and is 2 layer, with both the sturdy, wide-mesh metal, and the narrower mesh plastic.  As the tree grows next year, I may need to add a bit more, higher, level, but I think this will be good, for the most part, for protection in 2018.  After that, I think these trees will be tall enough to dispense with the fences.

This was the chestnut variety Maraval.  Next, I need to to the same for the Marissard seedling that grew as much, and the smaller Marigoule that I moved to a new location last week.

Edit 10/8/17:  Now Marissard seedling is also in a new, larger, double-fencing cage too.  I hope these work.  It's really disappointing to check on trees and discovered that a year of effort, or more, has become a salad for roaming deer.

Posted by Daniel Wachenheim at 8:13 AM No comments: Links to this post


Today was my first taste of any American persimmon, and in this case, the Yates persimmon that I planted in early 2015.  This tree has about a dozen fruits.  The ripe persimmons almost fall from the tree, when touched.

These are smaller than Nikita's Gift, and earlier.  Not quite as sweet, I think as Nikita's Gift or Saijo.  They are a wonderful rich flavor, thick texture, not as liquidy as some ripened astringent Asian persimmons I've eaten.

All I can say is, definitely worth growing.

Posted by Daniel Wachenheim at 7:53 PM No comments: Links to this post 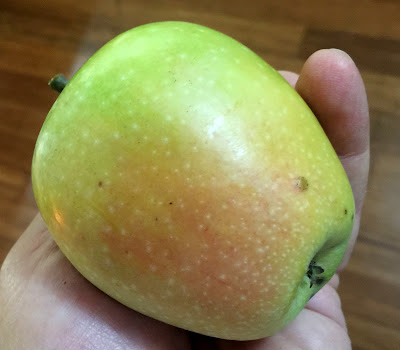 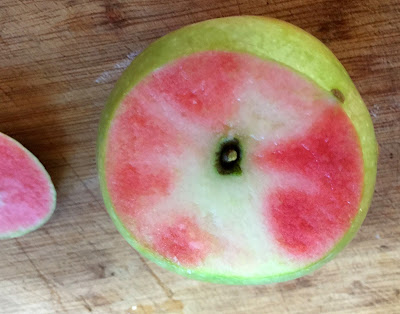 Last year I picked up some scion of "Arlie Red Flesh" apple at the Home Orchard Society scion exchange.  It took, grew rapidly, and there are a few apples on that branch.  This was my first one, ever.  Cool to look at, slightly tart, sweet, pretty good tasting apple.   Others have re-named and trademarked this apple as "Hidden Rose", but it is not patented. 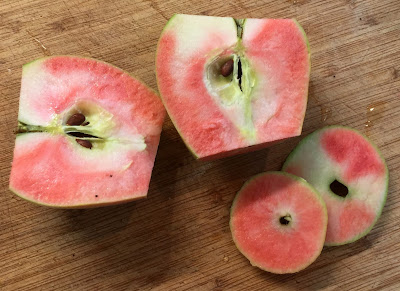 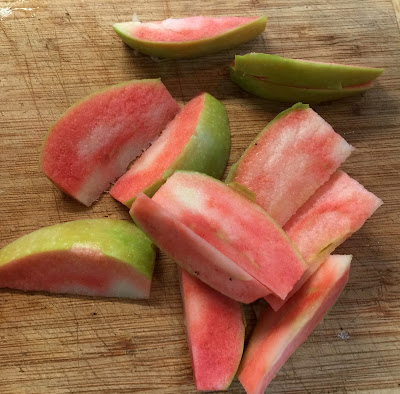 Posted by Daniel Wachenheim at 7:04 PM 5 comments: Links to this post

Rainy season has started, so I think it's a good time to transplant some trees.

A few years ago, root-stock suckers grew from an apple tree that I had cut down the year before.  I believe it was a semi-dwarf size.  Just playing, I grafted a columnar variety onto the root-stock.  This weekend, I wanted to transplant it to a more suitable, permanent location.

When I dug it up, the root was rather oddly shaped, I imagine due to the origin from a prior tree.   I don't know if it will survive, but nothing ventured, nothing gained.


Last year we planted a Dawn Redwood (Metasequois glyptostroboides) tree.  I followed the recommendation of Washington State Horticulturist Linda Chalker-Scott, and washed the soil from the roots, pruned crossed or damaged roots, before planting.  It had so little remaining root, I wondered if it would live.

It did nicely, leafed out nicely, and grew about a foot taller.   I didn't expect much. The adage is First year sleep, Second year creep, Third year leap.  I think the second year grown is at least "creep"  so maybe next year it will leap.  These trees have the potential to grow 5 feet per year.

Posted by Daniel Wachenheim at 5:02 PM No comments: Links to this post