Starting Another Dendrobium nobile from a keiki

Dendrobium Yellow Song "Canary" grew a nice keiki so I decided to remove it and pot it up. Some of the web references, that I read, claim that keikis siphon energy off from the parent plant. Removal of the keiki ("keikiectomy"?) might help it grow and bloom. I don't know if the authors truly know that. But it's part of web orchid lore. There's also the fun of watching a new plant grow.

This was a keiki that I started in July. This was a nice, easily blooming variety, white flowers with blue fringes. It grew a nice fat looking pseudobulb cane, and now is producing 2 new sprouts. It's been getting the "weakly, weekly" 1/4 strength plant food treatment, high nitrogen growth formula version. 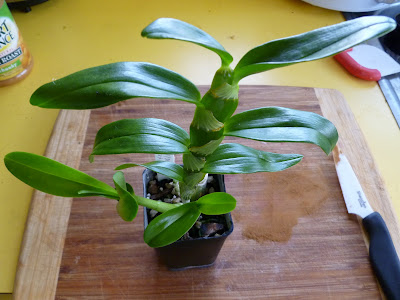 I've left it in the original container and growth medium. It may be good for another 6 months or year, before repotting is needed. 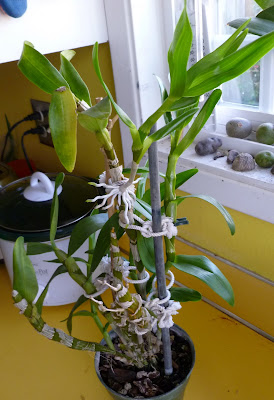 This is the Dendrobium Yellow Song "Canary" and keiki. I let it grow longer than I intended. I think no harm was done. 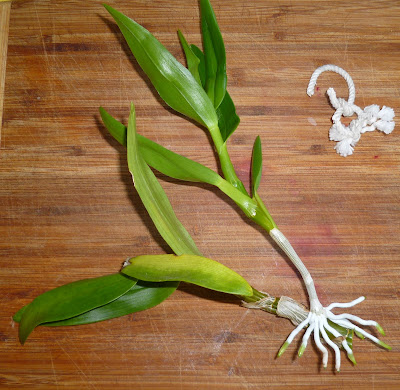 A section of parent pseudobulb is cut off along with the keiki. I don't have the fine touch, to just pull it off without causing damage. So I cut a section instead. The green root tips are a sign of healthy active growth. 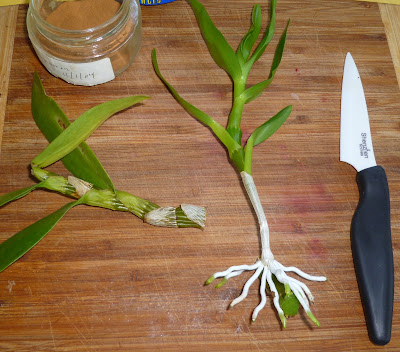 Similarly, I removed the remainder of the cane, from above the keiki. 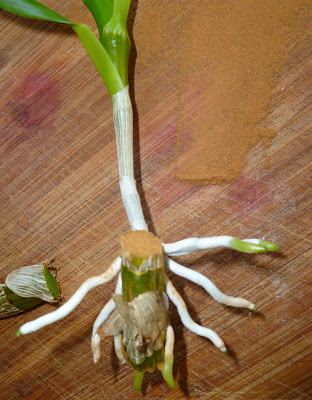 Some cinnamon is added to the cut surfaces. That's for mold prevention. 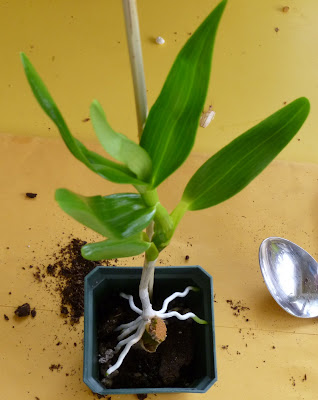 Resting in new container on bark-based orchid mix. Before adding medium, I placed the bamboo support stake into the pot. Easier that way. Less likely to damage the keiki's roots. 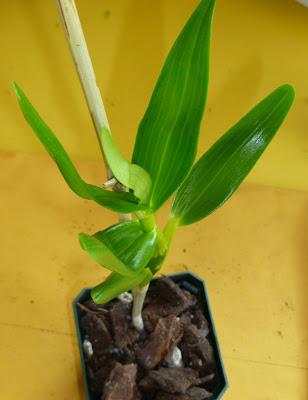 Now more bark medium is added. The top of the medium is at the juncture of keiki with stem.

Now it's just a matter of care. Same as an established orchid plant. I watered to settle it in, but will try to hold off more watering for a week or so. Probably best not to have watered the first day. I don't have the self discipline to wait.
Posted by Daniel Wachenheim at 11:19 AM

Daniel Wachenheim
This blog is a garden diary combined with home research journal combined with notes for future years. Also, a few things here and there about other projects. I hope the information posted here is helpful. I don't have promotional links. I don't advertise companies or products. My philosophy is do-it-yourself, reduce, reuse, repurpose, create, learn, share,, and enjoy the process. I enjoy propagating my own plants and trees, grafting, saving seeds, and passing on to another generation. Accessible gardening is a growing interest. That's all I can think of at the moment. I hope you enjoy and learn some useful or interesting things from my little blog.